Say NO to Dust!

Hydro SandBinder is an eco-friendly and effective liquid which controls dust and keeps your arena footing dust-free at its best year-round.  For dry climates around the country experiencing drought, as well as freezing temperatures, the Hydro SandBinder liquid will keep you riding without the addition of water.

Traditionally, riding arenas would use water to eliminate dust and would highly depend on water as a binder to keep the footing stable and consistent. Water is a finite and in most parts of the country an expensive resource! Apply Hydro SandBinder for drought stricken and freezing climates where watering is not an option.

Hydro SandBinder coats the sand grain while lightly binding the sand particles.  And, it does not get sticky like most waxed or oiled arena footings!

Without a binder, arena footings get very dusty and loose, and geotextiles sand additives separate from the sand grains and travel to the top and sit like a carpet.

Hydro SandBinder acts like water—controlling airborne dust but, unlike water, it lasts many months!

Given the fact that the Hydro SandBinder product completely eliminates watering and can perform regardless of the season, our customers have come to understand why it is a great choice.
At a footing depth of 3 inches, two (2) 275-gallon IBC totes (550 gallons total) of synthetic fluid is sufficient to treat a 10,000 square foot arena.
Longevity of our Hydro Sandbinder, and thus, your dust-free arena footing, is normally 8-12 months before needing a maintenance coat with 1/2 of the initial amount.  It doesn’t simply stop working over time! Rather, its dust suppression efficiency degrades over time as the product is physically degraded through mechanical wear or is cross-contaminated with untreated materials. 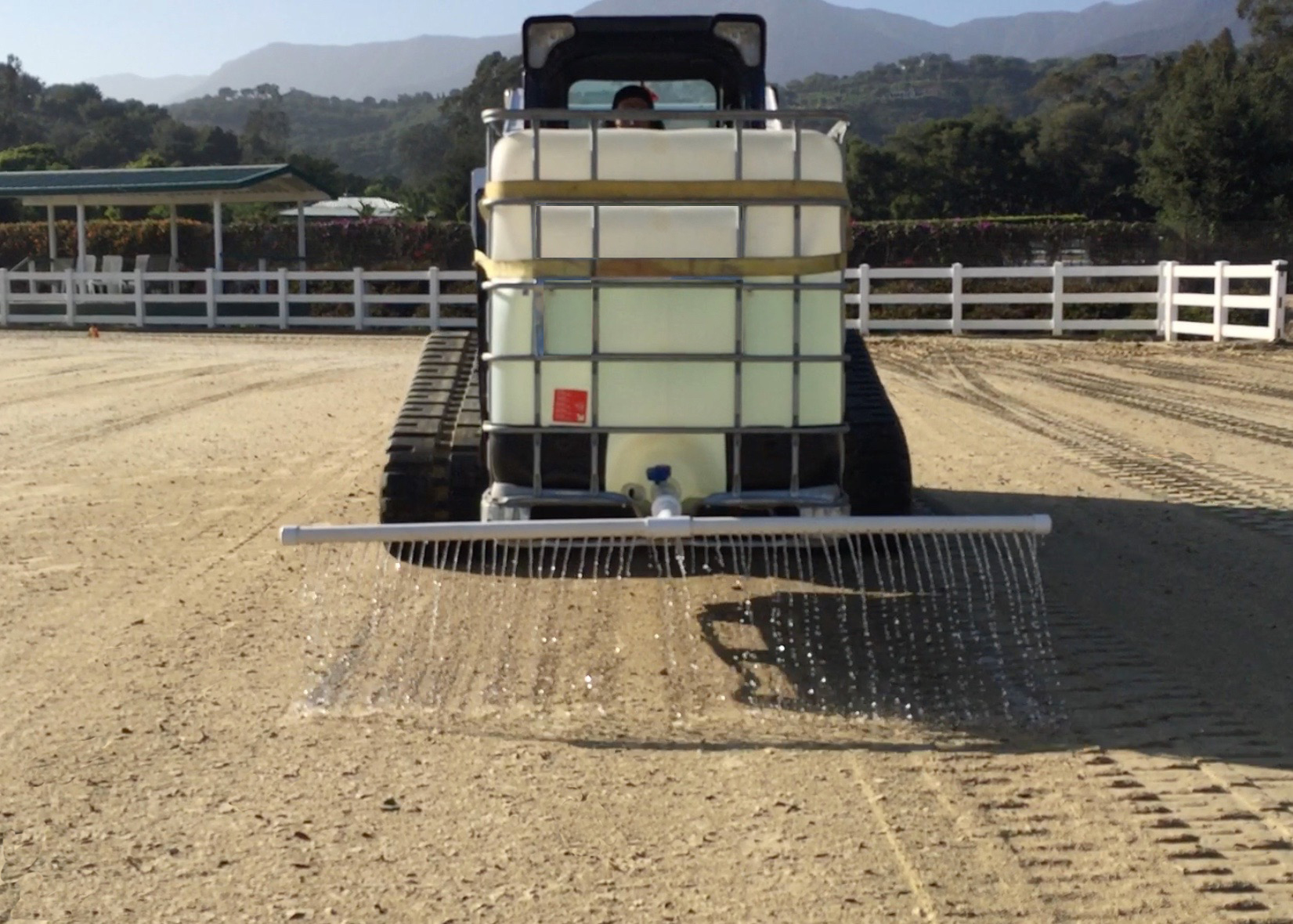 1. Hydro SandBinder comes in 275 gal tanks delivered to you on a truck with a liftgate for easy unloading.
2. Little preparation of your arena is necessary. Just groom and level your arena footing as usual.
3. Spraying the liquid can be done with your tractor or a Skids Deer/Bobcat (see photo), or transfer the liquid into a water trailer/wagon and then spray the surface.
4. Follow up with your arena drag and enjoy your dust free ride for many months to come!   After 12-16 months, re-apply 1/2 of the initial amount to enjoy a dust free ride.

"It’s in! Night and day difference for us here needing to conserve water and not…

November 2018 "Each winter, we refresh the indoor arena with HydroSandBinder to prevent dust and…
Close Menu